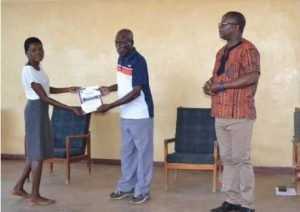 For the project Girls Empowement Club, which aims at promoting the access to school for the girls, has been held at the Charles Lwanga Secondary School in Balaka the meeting with the Balaka District Commissioner Emmanuel Bambe who has appealed for a joint action of the Government and civil society to reduce the school dropout.

Bambe expressed concern that the number of girls dropping out of school continues to rise in the district, in spite of the efforts made. He said “there is need for government and other stakeholders to join hands in addressing the challenges that impede children from proceeding with their education”.

The meeting was at the end of a training course organised by the Marist Brothers of Malawi and the representatives of the Girls Empowerment Club. The main objective of the training was to orient and train Girls Empowerment Club and their executive committee members on how to develop better and sustainable Girls Clubs that can take a primary role in empowering young women and girls to lead change.

The project Girls Empowerment Club, which has been implemented in cooperation with FMSI and received the support of the organization Misean Cara, is based on the role of the girls themselves for the promotion of the girls school attendance and the change of mentality in their communities regarding the importance of girls education.

Bambe in his speech confirmed the need of the initiative: “There is a quite a substantial number of girls and boys that drop out of school annually due to poverty in their families. In fact, some quarters say we are producing the most dropouts in the country,” he said. “It’s against this background that I would like to thank the Marist Brothers for coming up with this initiative that aims to address some of the challenges these children are facing. As a council, we pledge our commitment to working with them to ensuring that the number of children dropping out of school is significantly reduced”.

Currently the Girls Empowerment Club carry out several activities that are involving the school students like meetings on particular issues of interest, awareness campaigns, actions to bring back to school the girls who have abandoned because of early pregnancies, training in business skills to make able the girls to start activities to pay their school fees.

Maggie Gundo, the project coordinator and Esther Khwisa the President of the Girls Empowerment Club confirm that after few of time the members of the Club are already 75 and among them some boy too.

The initiative is part of the larger program New Horizons for a transformative education model, that aims at promoting the access to quality education for children and young people in difficult socioeconomic situation.

As they say to the stress the impact that girl’s access to education can have for the whole society: “Educate a girl is educate a whole village”. For that, as says Br. Francis Jumbe the coordinator of New Horizons “as Marist Brothers, we are keen to see all girls getting quality education and advancing their lives”.