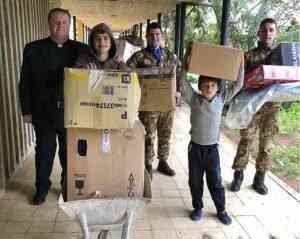 In Lebanon, from Beirut to Saida, the ancient Sidon, all people know “Les Frères” (The Brothers). It is the name of the former school of the Marist Brothers in Rmeileh, at the gateways of Sidon, 40 kilometers South of Beirut. During the civil war, the school has been occupied and transformed in a military base. After the war, the building has been neglected for many years. Now it has a new life. The armed forces are on one side of the school compound and in the other side is a new education project “Fratelli” of the Marist Brothers and the La Salle Brothers. The project involves 600 refugee children, 200 from Iraq and 400 from Syria, and Lebanese children. Our aim is to enlarge the number of beneficiaries among the refugee children who hope to go back to their country and who are at risk of remaining out of school for years.

Through the Fratelli project, we want to avoid a lost generation. The families of these children would like to go back to their homes or go to another country to start a new life, but it could take a long time before this happens. Meanwhile, it is important to give to their children the opportunity to go to school and to be integrated into the Lebanese education system. The local community considers the Fratelli project to be a high social impact project that is able to be a positive change in the life of the new generation. The rehabilitation of the main buildings has been supported by the Italian Bishop Conference (CEI) through a contribution of 142,000 Euros (8xmille) out a total cost of 184,000 Euros.

The project saw a great participation by the “Garibaldi” Bersaglieri Brigade engaged in operations in Lebanon through important donations in terms of consumables, educational materials, as well as clothing. A sincere thank you to them too.

Syrians in Lebanon: the help of Humanity Campaign