Travel journal among the children of Rmeyleh

The big word “Fratelli – الإخوة” stands on the square in front of the building, greeting the new arrivals warmly. We are in Rmeyleh, about thirty kilometers from the Beirut airport, where we have been welcomed by Brother Miquel. It is dark, but the dim light lets us glimpse the imposing cement building that we will learn to know the next day. A small FMSI delegation arrived from Rome, among us is Marzia Ventimiglia, Director General of the Foundation, Brother Álvaro Sepúlveda Child Rights Advocacy Officer, Federica De Benedittis responsible for fundraising and the undersigned, who works with FMSI on the communication front. With the group there is also Francesca Sironi, an Espresso reporter who came to tell the life of Syrian refugees in Lebanon a step away from the border. 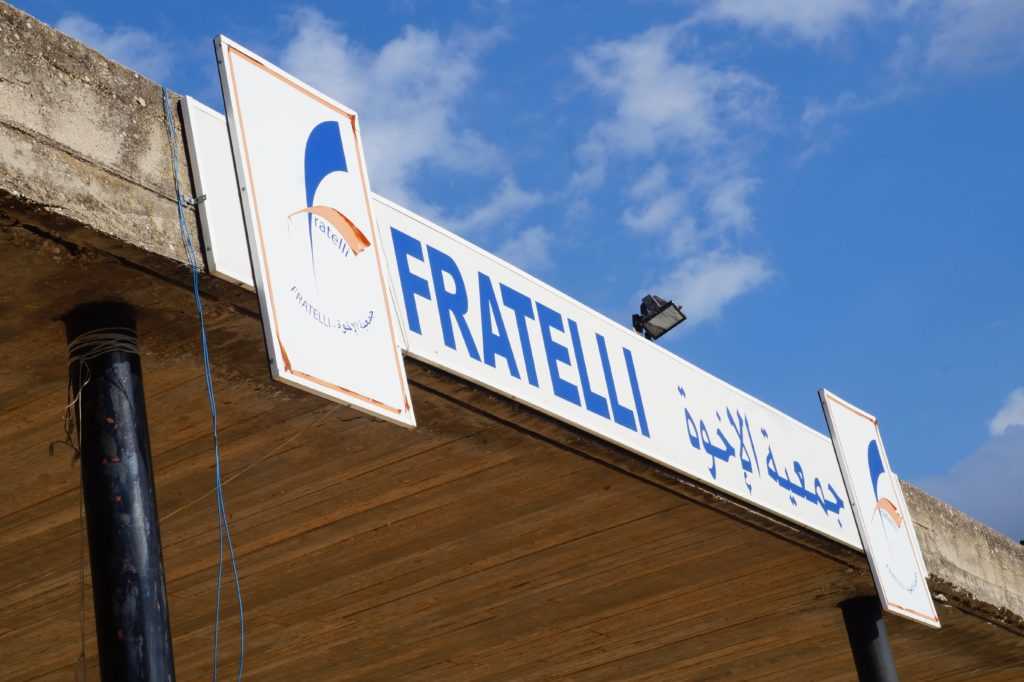 After a dinner of falafel, stories and reports generously provided by Miquel (our Virgilio and the backbone of the “Fratelli project”), we go to sleep waiting for the light, impatient to see that world approached in the darkness. Between a distant muezzin’s song and the echo of some gunshots, the night passes slowly.

Morning light reveals an incredible landscape on the seafront of Sidon (Saida). Sara and Laura, the two young volunteers of the house, one Spanish and the other Mexican stationed in Rmeyleh for a year, accompany us to visit the building: in addition to the wing renovated in the last two years, we discover a vast area abandoned and scarred by the signs of war. Marist school until the eighties, at the time frequented also by personalities like Hariri, was occupied from 1985 onwards by the militias of the various conflicts. Inside, in addition to rubble, green boards, broken glass and dirt, a torture chamber. Imagination and History give us the other elements to reconstruct the life of that place. We go out to breathe. 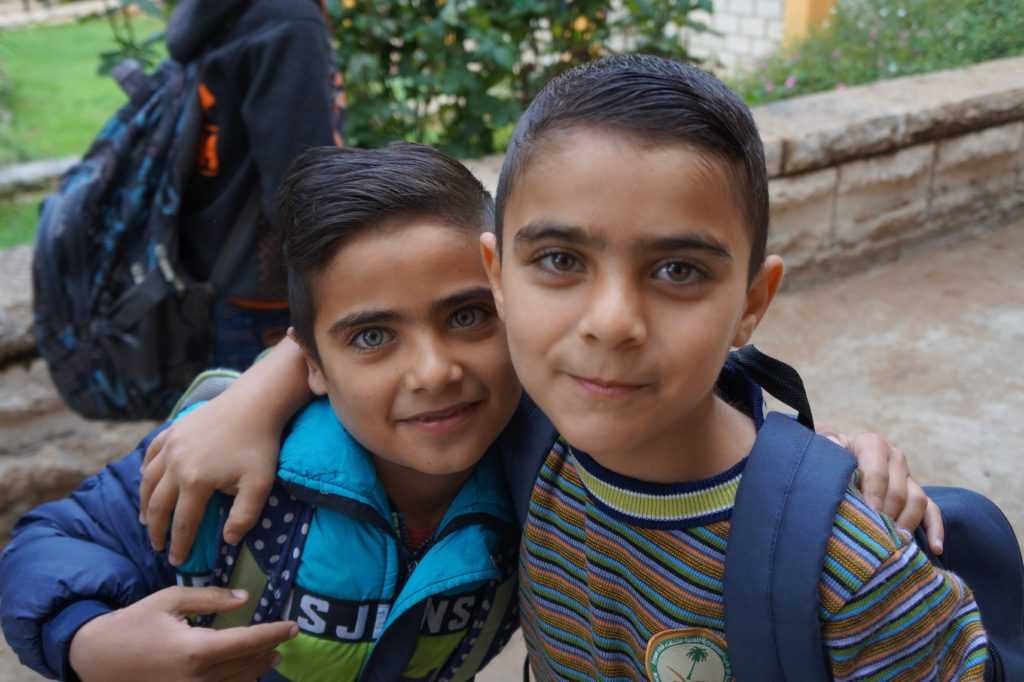 Next to the swings, a long barbed wire fence divides us from another wing, still occupied by the national army, forced cohabitation that instead of giving security, makes that place even more insecure. Walking along the patio, Miquel shows us the small steps forward made literally from 2015 to today, to win back handkerchiefs of land, tearing them away from the militias and the weeds. A good and slow flood, which the determined Brother Miquel brings forward day after day: “before we arrived here” … two steps forward and “then here” … two more steps forward and … today “we have arrived here”. The “Progetto Fratelli” sees, from the beginning, side by side, brothers Maristi and Lasalliani: a collaboration that has given extraordinary results, as evidenced by what presents itself before our eyes.

Let’s go back to the renovated area, it’s time. The joyous roar of the children breaks the silence of the place. The busloads of life arrive shortly after eight: these vehicles are an indispensable means to accompany the children from home (camps, shelters or other) to school; if they were not there, most of them could not get to Rmeyleh. Activities alternate between “after school”, “pre-school”, “school support” or – again – “summer school”. Not a real school: the Lebanese government has in fact established that education for refugee children is the sole prerogative of the public, object of copious international funding. So the Fratelli project takes care of all the possible extra-curricular educational activities, from English and IT courses for children and teenagers, to sewing courses for their mothers. Precious moments of serenity and true inclusion, which bring those young people out of the difficult life of the camps and the constant memory of the horror of the conflict.

Over 300 children and teenagers aged 3 to 14, including Syrians, Palestinians and Lebanese “pobres or empobrecidos or sin papeles”, explains Miquel. In that place, the mixture and integration between cultures, religions and nationalities is powerful, starting with the teachers, mostly young Lebanese. 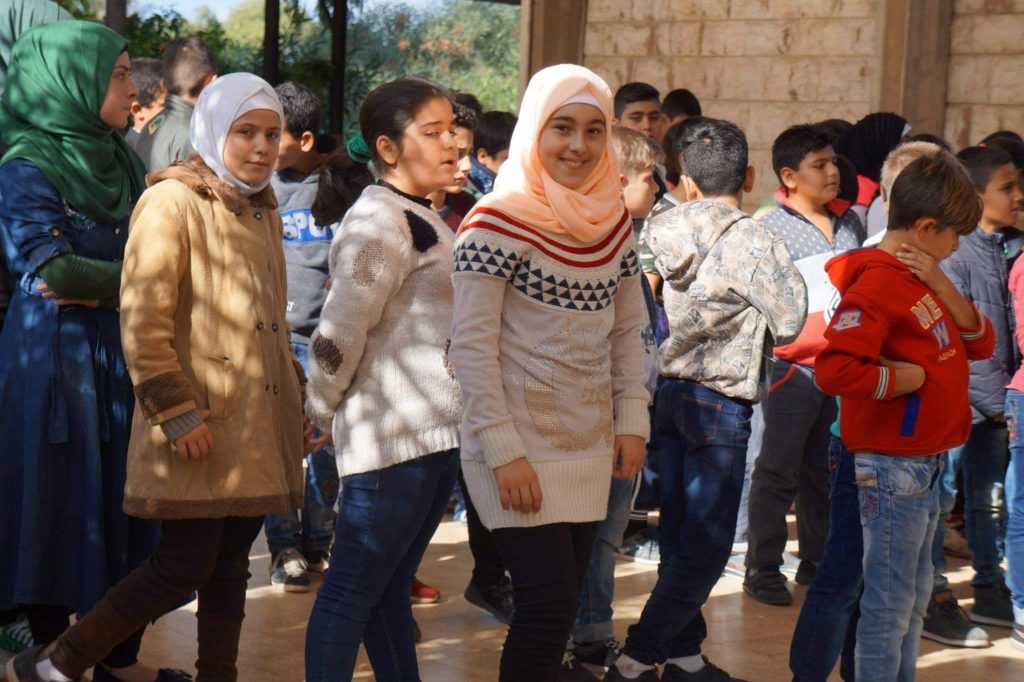 Outside, another world. The Syrian exodus – after the first Palestinian and Iraqi one – brought one million people to the country and, the Lebanese, are increasingly less tolerant of this wave of migration, which, among other things, radically lowers the price of labor. The problem obviously is given by several factors. Among these, the so-called “caporali”, who exploit the Syrian workforce for a few pennies a day, are made inevitable by making poorly-priced tin-roofed shacks pay off with dollars.

We enter one of these, accompanied by Miquel and Youssef, our adorable 13-year-old translator (or a little more), who speaks perfect French in addition to Arabic. Set between rows of greenhouses, at the end of a dusty path, the small house made of bricks, mud and sheets emerges: one of those rented for 200 dollars a month. The family welcomes us with warmth, offering us coffee. Inside, between red carpets and cushions, the heart swells the joy of the two girls in front of the stuffed toys “sent” to them by Federica’s daughters. Daddy is gone, he died in the war. The new mate, a Syrian military mate, tells us their story. For the future they hope to go to Canada or Germany.

We remove the trouble, a greeting, let’s start again. Miquel despite being Catalan, knows the streets of Lebanon to menadito and with them, the follies of a traffic without rules, between arrogant roars, cars on the contrary and nervous horns. Always try to choose the quietest roadway. So we arrive at Sidon, a land steeped in history and an “always” characterized by cyclical conflicts and intolerances.

Located a few kilometers from the Golan Heights, close between Syria and Israel, since the dawn of time Saida is a crossroads of cultures. From the greek-orthodox sanctuary tower the view is breathtaking: on the right the mountains that divide Lebanon and Syria, more to the left the great Palestinian camp: more 60 thousand people, born in 1948, say it is impenetrable, “a ghetto where nobody can enter” they explain to us. In a place where religion, indeed religions, permeate everyday life and every single action, cohabitation is difficult, the climate – they tell us – is tense, today more than ever. It’s twelve o’clock, the muezzin calls are superimposed from every part of the valley, the sound is suggestive, the atmosphere almost surreal.

We leave for the visit to the Shelter, the “refuge”, a two-storey building that houses 30 Syrian families. Here too a thousand stories, divided families, children without mothers, uncertain future. Wastes everywhere, a woman patrols an abandoned bag, a doll lies upside down in the scrubland … an extraordinarily intact yellow tricycle is led by a proud child of his racing car. “If only I had brought a bit of my son’s games …” I repeat once again to myself.

It’s evening, let’s go back to Rmeileh. The light skips and someone explains that it is Israel that ration electric current. From Aleppo, at dinner time, a friend of the community arrives: he talks about the war and its consequences. We are struck by the history of those families, found a few days ago, under the rubble: for months they lived there, hidden to escape the conflict, in the darkness and in the belief that the war and Daesh were still there. Stories to tell, not to forget.

While we are writing, we are in Italy. The news tells of a new Israeli raid south of Damascus. There is no peace for these lands. And the thought goes to them, the many children we have met.

Written by the children of the project Fratelli, Rmeyleh, Lebanon

Syrians in Lebanon: the help of Humanity Campaign

Meeting of the 14 Marist social works in Catalonia