The doctor Nabil Antaki, after the outbreak of the Syrian conflicts ten years ago, decided to embark himself on a very difficult mission: he had done everything possible to bring comfort to the civilians that war had unexpectedly transformed into victims: displaced, injured, traumatized, left without food or water. In this way the Blue Marists were born: a group of volunteers who, over time, would become a sound organization of solidarity, with 155 workers and fifteen projects under its belt, that provide first assistance, professional training, and school support for psychological rehabilitation.

Today in Syria there are only a few hotbeds of conflict left, such as the province of Idlib and the north-eastern region, yet “peace is still a long way off and, paradoxically, people are even worse off than before due to a frightening economic crisis,” says the doctor, who together with Brother George Sabé recounted the sufferings of his people in the book Letters from Aleppo, published last November for Harmattan Italy. An alarm confirmed by data from the World Food Program, according to which, while the country has over 400,000 dead and 12 million displaced people, almost half abroad, and 60% of those who remained are not sure they will be able to eat every day: double the amount recorded in 2018. There are almost 1.5 million Syrians who could not survive without food assistance from humanitarian organizations.

In this context, the tireless work of the Blue Marists represents a small light in the daily darkness of so many Syrians. Like the elderly, who in recent months have found themselves even more fragile: “Many are alone, because they have no family or because their children have fled the war, and their conditions are truly miserable. This is why we have set up a kitchen in which some of our volunteers prepare a hot meal every day for 190 elderly people in need.” The boys in the blue t-shirts distribute the food in the houses, bringing at the same time a little human warmth and some support: “By visiting these people, in fact, we realized that many of them need someone to take care of their personal hygiene, to clean the house, and to buy medicines.”

However, the category that has suffered the most serious consequences of the conflict is children, many of whom in their life have known nothing but war. For them, the risk of abuse, including early marriages, is added to the poverty and lack of education: still today two million children are cut off from school. “Alongside material assistance, we focus on educational projects for preschool children whose parents cannot afford a private kindergarden,” says the Syrian doctor, “while our team of psychologists and volunteers works with children and adolescents who experience psychosocial distress.” 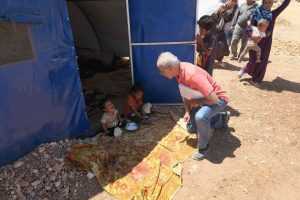 Among these, even more vulnerable are the children who grew up in refugee camps. Al Shahba, 40 km from Aleppo, is home to 125 Kurdish families (750 people) who fled Afrin after the Turkish invasion in 2018. “Our volunteers visit it twice a week, bringing packages of food and health products and organizing games and educational activities for children, while with a medical assistance we provide a pediatrician, a gynecologist and a pharmacist.”

Yet despite everything, for Dr. Antaki the war has not succeeded in destroying a model of interconfessional coexistence that represented normality in Syria: “My patients have always been mostly Muslims, as are 70% of our beneficiaries today. Here we make no difference, we all feel Syrians. Among our volunteers there are several Muslims: we share the same human values, ​​and we have no difficulty in working together.”

The extremism that Syria has experienced in recent years, that has taken away the elder brother of the Aleppo doctor, killed in 2013 by a fundamentalist group, “was imported from abroad, is not part of our tradition. On the contrary, normal people have had the opportunity to know and appreciate the work of many NGOs and Christian realities who have never stopped helping everyone during the conflict.” Dr. Nabil himself, with his US citizenship (because two of his children have lived in the US for some time), could have left Syria at any time; instead, despite the insistence of his family, he decided together with his wife to stay (both veterans of Covid-19).

“We strongly ask the international community to listen to the cry of the Syrians, of the children who had no childhood, of the young people who no longer have dreams. We join the appeal of the many realities, including the local Churches and Caritas, which are pressing for the lifting of the sanctions that strangle the people. And then, finally, we implore peace.”