The Case of South Sudan

South Sudan, the youngest of the African states, only achieved independence in 2011 after more than 20 years of war, culminating in the signing of a peace treaty with the government of Sudan. Since 2013, however, the State has not enjoyed peace, instead it has been torn by civil war and riven by daily battles for control of its territory. The Country suffers from severe and chronic internal instability in political, economic, humanitarian and military terms: civil conflicts have undermined the minimal economic and social progress that had been achieved by the State.

Despite the ceasefire agreement signed in 2018 between President Salva Kiir Mayardit and rebel leader (and former President) Riek Machar, kidnappings, violence, gang rapes and summary executions continue to worsen the humanitarian situation of millions of people. The underlying reasons for the civil war lie mainly in tensions over the division of government power and political offices, and the difficulty for the population to access work and food. According to Adama Dieng, UN Special Adviser on the Prevention of Genocide, however, it is no longer just a question of ethnic clashes, but rather of local power groups fighting for control of oil.

After years of civil conflict, an estimated 4.5 million people have left their homes to seek refuge in safer parts of the Country or in neighbouring States. About 2 million people are internally displaced and a further 2.5 million have fled the Country to Uganda, Sudan and Ethiopia. The risks to which the local population is exposed as a direct consequence of the armed conflict are a general increase in violence and abuse, sexual exploitation and recruitment, especially of young people, by armed militias.

The unstable political situation also affects the economy: with the outbreak of the civil war, oil production decreased while the number of people living in extremely vulnerable economic conditions has increased exponentially. Between October and November 2020, about 4.1 million South Sudanese were assessed as being in Integrated Food Security Phase 3, 2 million in Phase 4 and about 92 000 in Phase 5 (where 5 is the highest level of food insecurity).

The main causes of malnutrition – in addition to persistent conflict – are inadequate public facilities, precarious economic conditions and lack of access to humanitarian aid in remote areas of the Country. In addition, the spread of disease and viruses has led to the loss of large quantities of livestock and compromised harvests with direct repercussions on household economies. An estimated 40 per cent less crops are being produced each year due to labour shortages caused by large-scale displacement, both internal and external, the destruction of agricultural activities and the disruption of trade flows. Not only has the armed conflict affected the agricultural economy, but it has also deprived the population of access to drinking water, exposing millions of people to increased risk of disease, particularly cholera, caused by the use of contaminated water. 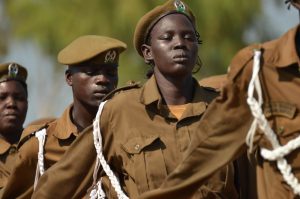 The Human Rights Council established the Commission on Human Rights in South Sudan on 23 March 2016 for a period of one year, subsequently extending its mandate – until its last confirmation in March 2021 – by resolution 46/23. The function of the Commission is to report facts and circumstances, collect and preserve evidence in order to clarify responsibility for serious violations and abuses of Human Rights and crimes committed in the Country, including sexual, gender-based, and ethnic violence, so as to end impunity. In 2021, the Commission documented 3,414 civilian victims directly affected by violence: men, women, children; killed, injured, abducted or subjected to conflict-related sexual violence; in the same year, the UNMISS office reported on the use of sexual violence, in the context of localized violence, as a weapon to punish rival groups.

Members of the UN Commission on Human Rights in South Sudan conducted their ninth visit to the Country from 7 to 12 February 2022 and produced a report covering the period from January to December 2021, detailing the main Human Rights challenges facing the Country, particularly with regard to the rights of women and girls. Violence among indigenous communities appears to be triggered by long-standing practices of cattle raiding and revenge attacks, facilitated by the proliferation of small arms and light weapons.

Despite the signing of a peace agreement between the conflicting communities on 27 October 2021, tensions remain high and attacks frequent. Incidents documented by the Commission on Human Rights in South Sudan include killings, injuries, rape and other forms of sexual violence, abductions, forced displacement, arbitrary detention and looting. The humanitarian situation remains extremely alarming, not least in view of climate change emergencies that continue to cause mass displacement, exponentially raising the number of women and girls at risk. For example, nearly 80,000 civilians were displaced by the violence in Tambura, further limiting their socio-economic rights such as the right to food, health, education and housing. Water, sanitation and hygiene conditions progressively and inevitably deteriorated.

Every day, in the world, numerous conflicts are fought: hatred and violence seem to be intrinsic to human nature, showing its worst face. The inhumanity of war no longer only involves soldiers and armies, instead it destroys the civil and social fabric of a community or a Country in its entirety, leaving imperishable and indelible marks on the common conscience and on the pages of history called upon to document its horror. The many current conflicts including the numerous forgotten wars show how heavily humanity is burdened by the weight of hatred and violence. Frequently, as in the case of South Sudan, even after the war itself has “ended”, conflicts between factions continue; and even when this does not happen, the effects often prevent the local population from rebuilding a new normality. The war continues, even after the “end” of the war itself, quieter to the ears of those who do not pay attention, sometimes subdued, sometimes louder. It exists and continues to deeply undermine the lives of the populations involved and to prevent them from fully enjoying their rights. South Sudan is just one example. Like Afghanistan. Syria. Yemen. Somalia. Libya. Nigeria. Wars that we cannot ignore: let us not forget any of them, instead let us shed light on each one. Let us not forget the civilian populations who, living in war-torn territories, suffer the horrific consequences caused by the designs of those in power and of political and economic interests. Even if we cannot actively contribute to their well-being, historical memory is our duty as human beings.

“If one of us, any human being, is at this moment suffering, is sick or hungry, it affects us all. It must concern us all, because to ignore a man’s suffering is always an act of violence, and one of the most cowardly.”