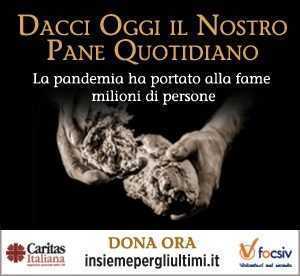 On the eve of July 8th, on the anniversary of Pope Francis’ historic visit to Lampedusa and the “International Day of the Mediterranean”, which remind us that today, more than ever, we are “all in the same boat”, Caritas Italiana and FOCSIV (Federazione degli Organismi Cristiani Servizio Internazionale Volontario) launched the Campaign “Give us our daily bread”. A campaign to urge a concrete gesture to support interventions in the various areas of the world from Caritas and FOCSIV members – 62 interventions in Africa, the Middle East, Asia, Central America, Latin America, Eastern Europe and the Balkans – so that a simple action can be realized: “Share the bread. Multiply hope”.

An endless drama that “requires to be addressed not with the logic of indifference, but with the logic of hospitality and sharing in order to protect and promote the dignity and centrality of every human being”. These words of Pope Francis were addressed, during the historic visit to the island of Lampedusa on July 8 2013, to the many victims of shipwrecks, who in search of a future lost their lives at sea, but – as the Holy Father himself has repeatedly reaffirmed – concern all the poor, the excluded, the forgotten, victims of a globalization of indifference.

They are the most affected today by the consequences of the pandemic, which has caused an increase in inequality and a drastic reduction in the resources essential for survival. 55% of people in the world today live without any social protection. They have lost basic human rights such as access to food, health and decent work, and find themselves deprived of all kinds of protection and even more vulnerable. This is the case in Latin America, India, some countries in Asia, in the Middle East, the Balkans and Eastern Europe, and especially in Africa.

The virus accelerates its run, especially in the poorest regions. A real humanitarian catastrophe on a global scale, a pandemic of hunger and poverty, according to WFP – World Food Programme, which will take the basic human rights away from more than a billion people, bringing the world back by more than a hundred years.

Caritas Italiana and FOCSIV in this emergency have joined forces in an alliance “for the love of the last”, so as not to forget those left behind, because without an overall vision there will be no future for anyone. The member organizations of FOCSIV including FMSI, with their more than a decade-long presence in the different communities of more than 90 countries, have devised interventions aimed at the weakest and most vulnerable sections of the population, to offer solidarity and concrete hope.

1- Food assistance to the elderly people of Aleppo in Syria: https://www.insiemepergliultimi.it/interventi/fondazione-marista-per-la-solidarieta-internazionale-siria/

2-Communication campaign and support activities to counter girls’ school drop-out after the lock down in Malawi: https://www.insiemepergliultimi.it/interventi/fondazione-marista-per-la-solidarieta-internazionale-malawi/

A New Horizon in Huelva